In January 2011 I attended a 3D workshop in Gothenburg, Sweden. The Workshop was tutored by cinematographer Geoff Boyle, FBKS, with Thomas Harbers from Greenpost in charge of the post-production side of it.

I decided to attend it after I was invited by the Gothenburg Film Studios guys to DoP on one of their open set short films during the Gothenburg Film Festival. You can see “Bad Room” on my “works” page, which in fact turned out to be shot on 3D thanks to my having been part of the workshop (shot with 2 Arri Alexa with Zeiss Ultraprimes on a Stereotec rig mostly set on a Panther dolly with jib arm).

One of my fellow student on the workshop was Benjamin Bergery, the European correspondent for the American Cinematographer Magazine. Benjamin is a very knowledgeable guy with a deep interest in all things cinematography and wrote a fantastic report about the workshop that was printed on the November 2011 Issue of the AC Magazine, that also featured a picture of myself amongst others.

Another very extensive report of the 3D workshop with extra videos taken from the actual footage that we took during those days and copies of the graphs and drawings used to explain the various concepts regarding Stereo 3D capture was published by Benjamin on his blog “The Filmbook” on the ASC website. There are also useful links at the bottom of the blog page.

Here are the links:

Here are a couple of pictures of myself on the Bad Room open set: 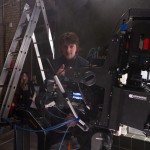 On the Panther Dolly with the Alexa on the Stereotec rig 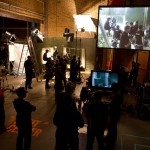 view from the bleachers 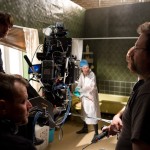