All posts in Art

I’ve began making panoramic shots more as a technical exercise than anything else, then I obviously fell in love with it. May it be for their inherent “cinemascope” feel or just for the unpredictability of the result (to a certain degree obviously), it has brought me back to my film days, when I was exposing and developing it myself waiting to see if my calculations were correct, if they were reflected in the density of the negative. Then there was the print: the choice of its contrast, the eventual reframe, dodge, burn. Of course all this and beyond happens digitally, but the thrill is partly lost – a lot more hair are growing back and there’s much more sleep at night during a motion picture production for the cinematographer, whatever type of product it is, a commercial, promo, documentary or feature film. At the same time, for me that I don’t work as a paid professional stills photographer, not being able to see right away what the result would be, brings back a certain excitement that I’ve been gradually losing since the advent of digital photography, with its onboard monitor and live views. When I shoot motion I don’t mind that actually, it is quite nice to be able to see what you’re going to get and I don’t believe in the saying “now everybody feels the right to state their opinion on the image out loud by the monitor”, if they do it means they’re unprofessional and should’t be working on a professional film set; on the other hand that is a practice that has always happened even when the image from the camera was fed through a low definition camera shooting through the camera prism and sent to (often) a nine inch CRT monitor (how the hell all those people could judge a picture from that sort of set up, when the cinematographer in charge wouldn’t have hoped to do that, remains a mystery – I guess there must have been herds of super skilled directors of photography among them). Then the excitement has grown even bigger once I started including HDR into my panoramic picture taking, I almost always shoot for that but often I end up not using it, making the panoramic stitch from the correctly exposed shots. Other times I’ve used  the HDR to get rid of the noise and have a bit more to play with during the grade although I try to keep it subtle, I don’t like the super saturated, solarised look of most HDR photography and I downright hate HDR on people’s faces. I find that a good way to age anybody of 20 years in one clean swoop is to use HDR on them. Going back to the cinemascope feel of panoramic shots (the name is in fact a synonym of it in itself), and the extreme way you can achieve that, I have to say that I find it very romantic. When that is achieved, even if you look at the picture let’s say fitted within the a 15” screen, and you can obviously see it in its entirety there’s something in your brain that forces to you to “read” it along its width, from let to right or right to left, making it an experience in time, therefore filmic. As silly as it may sound it is almost as the viewer’s eyes are used as a camera panning within the landscape so that they are prompt to analyse bits at a time, creating a longer experience. I’d love to incorporate human figures in my panoramic shots, to create a sort of storyboard, a tableau vivant, a story. We’ll see, so far I’ve only done it with my daughter and it worked quite well!

The following gallery includes pictures taken during a recent trip to Sweden, and will be added to my pictures page where you can find many other panoramic shots I’ve taken in the past. 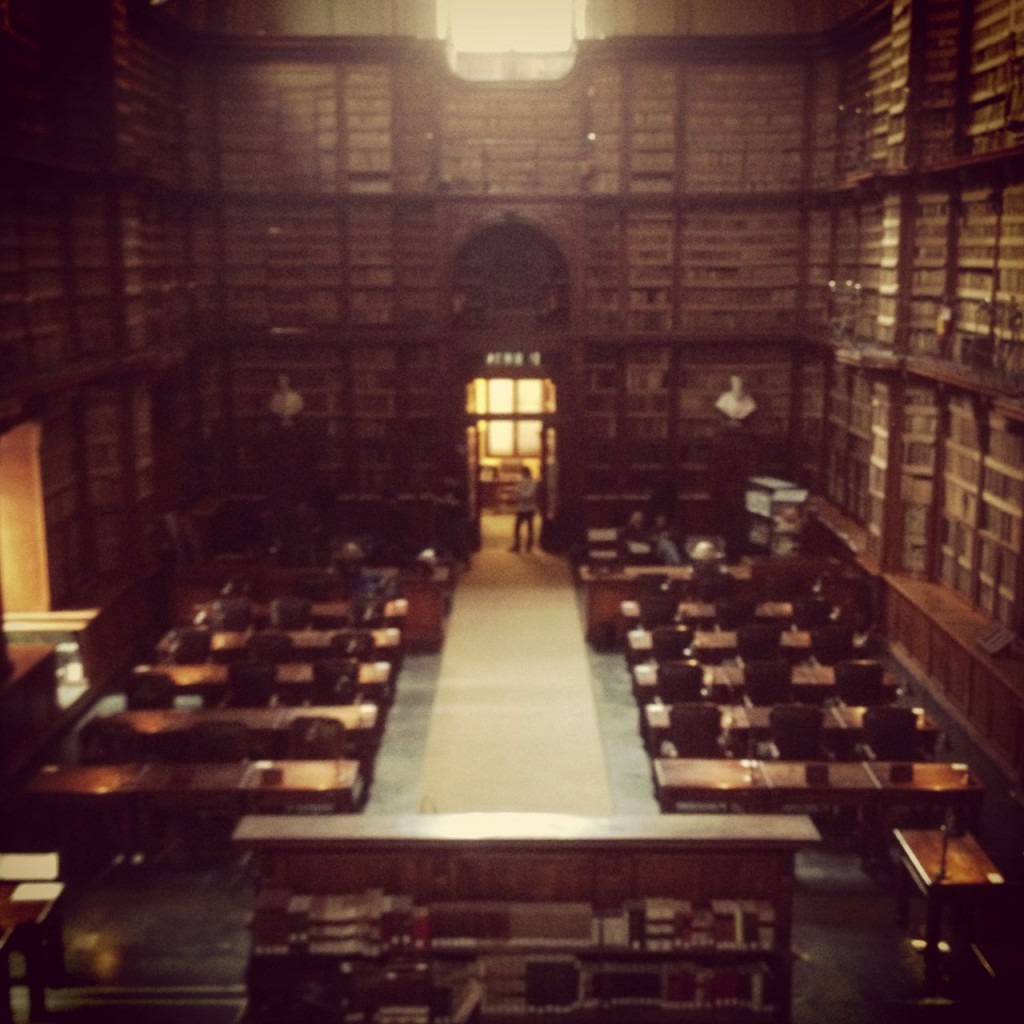 Instagram snapshot I took with my phone of the empty library moments before the artists and the crew arrived.

A couple of weeks ago I flew to Rome to shoot the promo for a feature documentary about world famous contemporary artist.

It was a fantastic experience and I proud to having been part of it. The project was conceived and directed by my old friend from the Roman days Marco Guelfi, a talented editor whose credits include “I Primi della Lista” a successful comedy feature film directed by Roan Johnson, amongst others. Marco was drawn to the project by one of Italy’s most renowned curator Prof. Bruno Corà, that has recently started a new art magazine named “Mozart”.

To promote Mozart’s first issue an installation by Jannis Kounellis and Bizhan Bassiri was set up inside the breathtaking Biblioteca Angelica, a XVI century library set in the heart of Rome, right along side S. Agostino church (that contains the Madonna die Pellegrini by Caravaggio), a scarce hundred meters away from Piazza Navona.

The project involved documenting the set up of the artists’ installations and then shooting a few crane shots of the artists themselves by their work.

We had full access of the premises and we used a 12 meter jib arm on some 8 meters trucks using a 2 axis remote head, all provided by ArtMotion in Rome, the rest of the camera kit was provided by Soulmovie that will also look after the post.

The next few days we shot Rome vistas as well interviews with Kounellis, Bassiri and Corà in their respective homes. Spending time with those two artist was fun and most of all inspiring.

Jannis Kounellis (b.1936) requires no introduction. One of the founders of Arte Povera at the end of the Sixties he has been a groundbreaking artist ever since. His works always reflecting a progression on his need of experimentation.

Bizhan Bassiri (b.1954) leading figure of the Magmatic Thought, is a plastic sculptor whose art spawns by very interesting thoughts that compare the artistic process to those of meteorites. 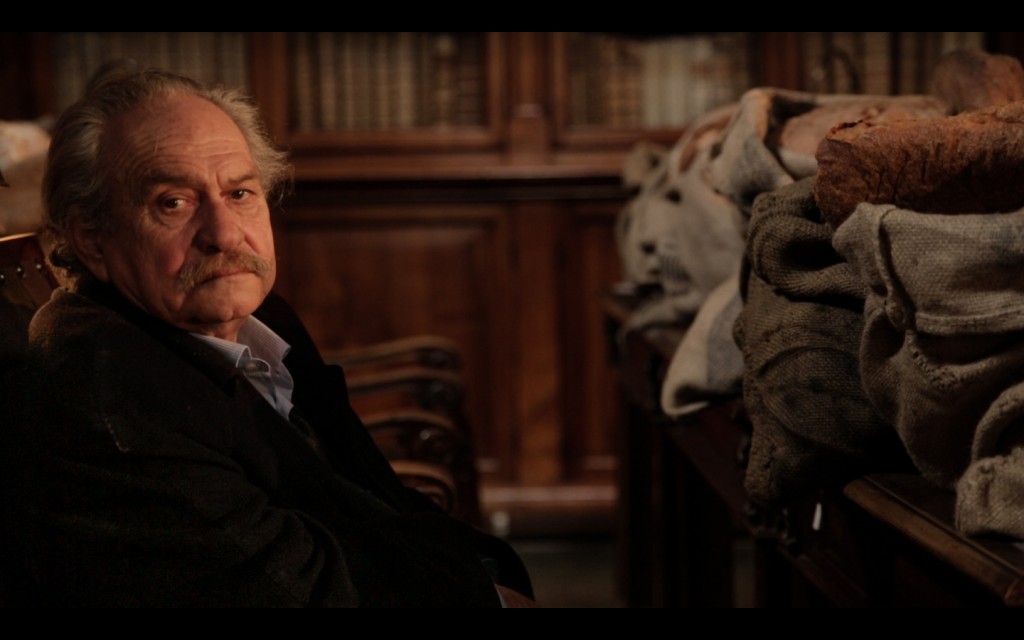 Frame grab from the actual promo footage showing Jannis Kounellis sitting in between the library desks on which he had placed his “Sacks of Bread”. 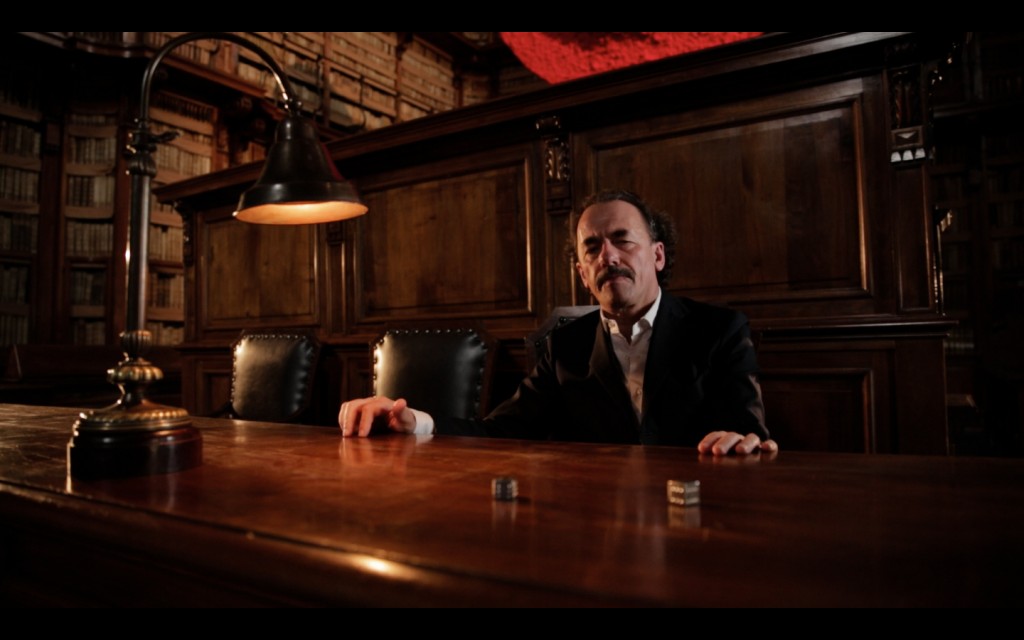 Frame grab from the actual promo footage showing Bizhan Bassiri underneath his sculpture “The Sun”. In front of him, on the desk, are his “Fortune Dice”. 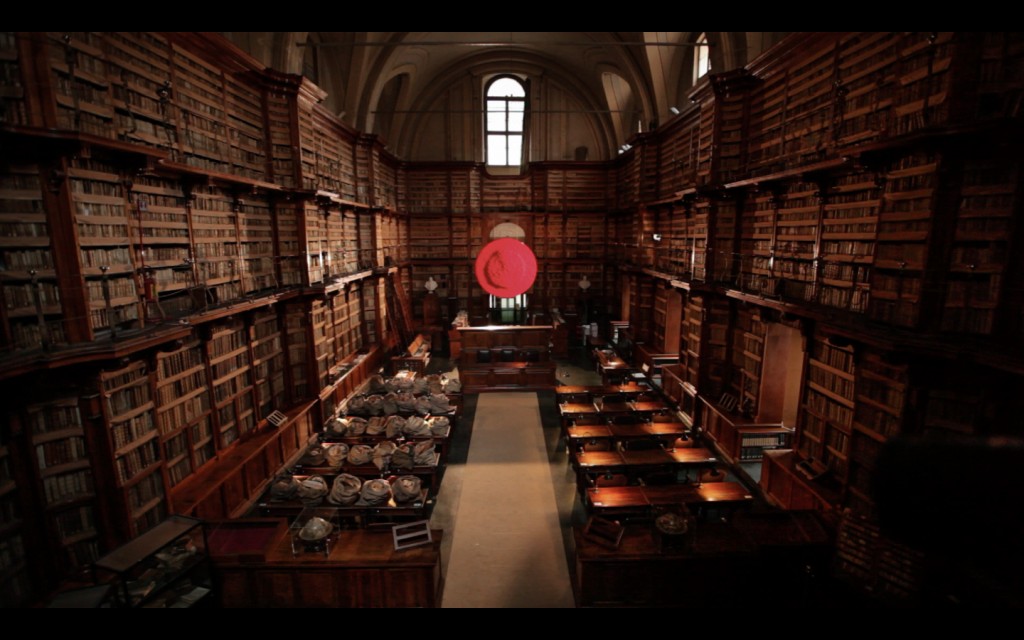 Frame grab from the actual promo footage showing the entire view of the Biblioteca Angelica with the art works installed. 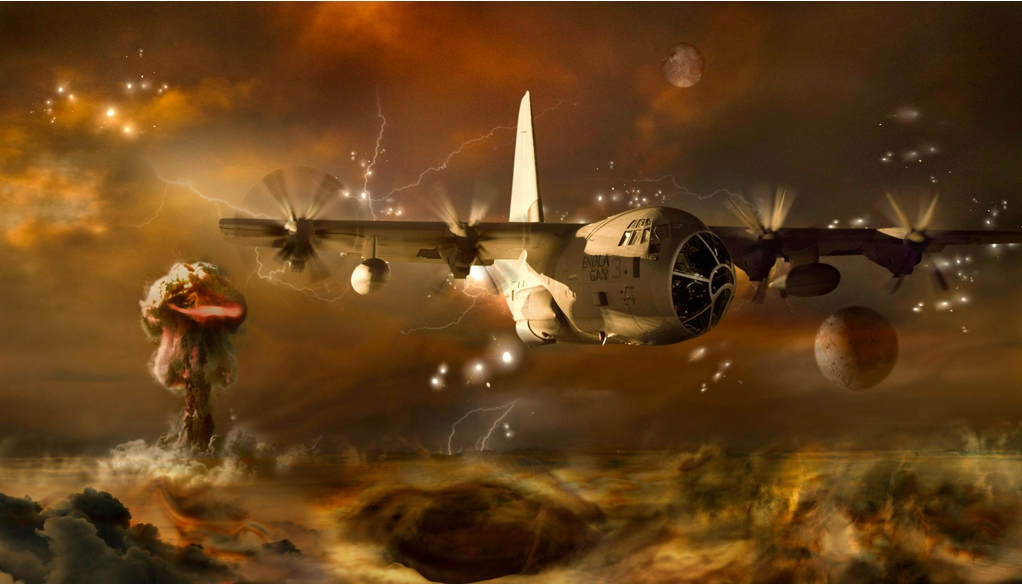 Barbara Nati is a visual artist that makes incredible images that haunt you for a long time since you first saw them.

The worlds she creates come entirely from her imagination, using thousands of images to make a new one of a world that doesn’t exist, but could. The depth of Barbara images’ meaning and the multiple subtexts that layer them give the viewer a daunting task: to think. This is the foundation of Barbara’s art: to look under the surface, not to stop at the beauty and awe of the image but to dig deeper to its utmost meaning. The first  step, the incredible entertaining impact of her images is what makes them so enjoyable and makes her art stand out nowadays. 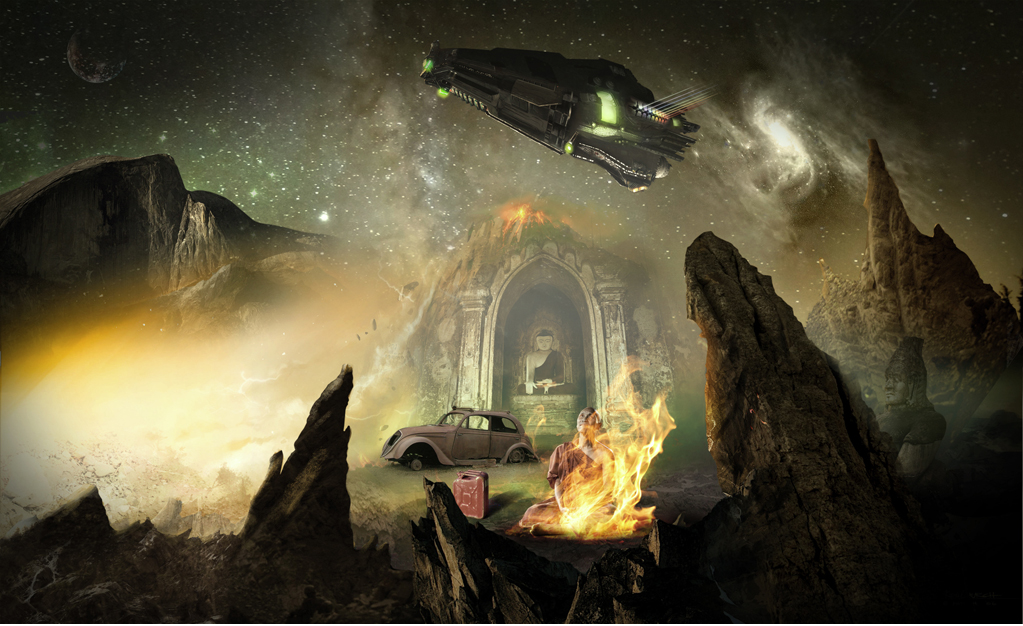 If the viewer wants can stop by the first layer, by the beauty and technic or go further and ask those questions that the artist has put there for him to ask himself. Often she tackles subjects that are not comforting and reassuring but thought provoking and disturbing and this, I think, is part of the job of a good artist. I certainly wish that more contemporary art had this same duality, taking into account what is nothing other than the two most main human characteristics: body and thought, pleasure for the eyes and awareness for the mind. Like the old time greats that with a perfect picture used to describe an imperfect world….

The following are thee images from Barbara Nati latest series: No farewell only endless goodbyes 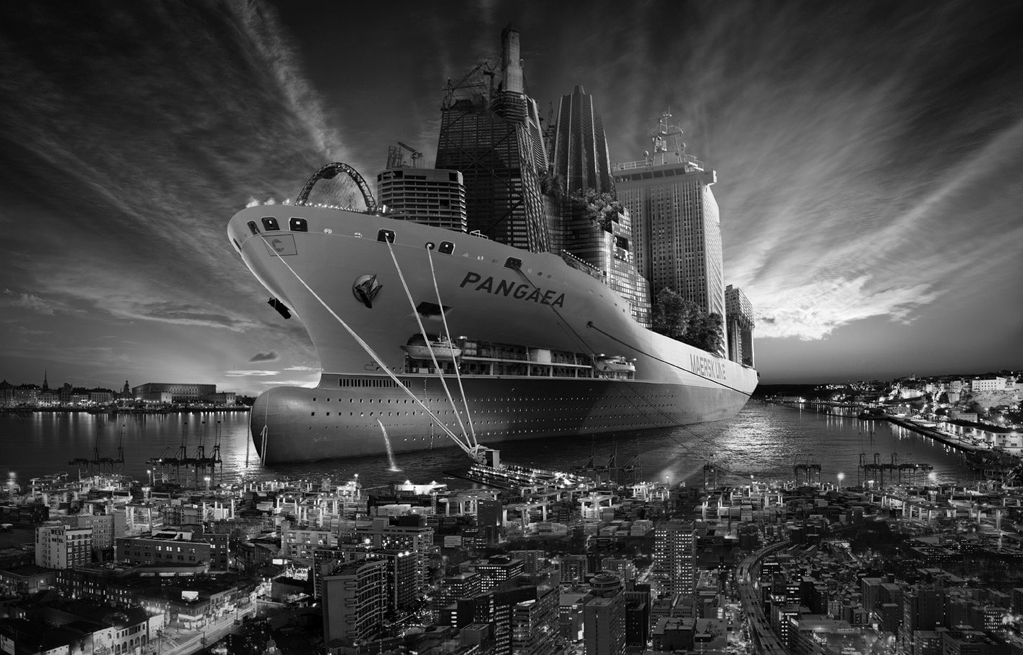 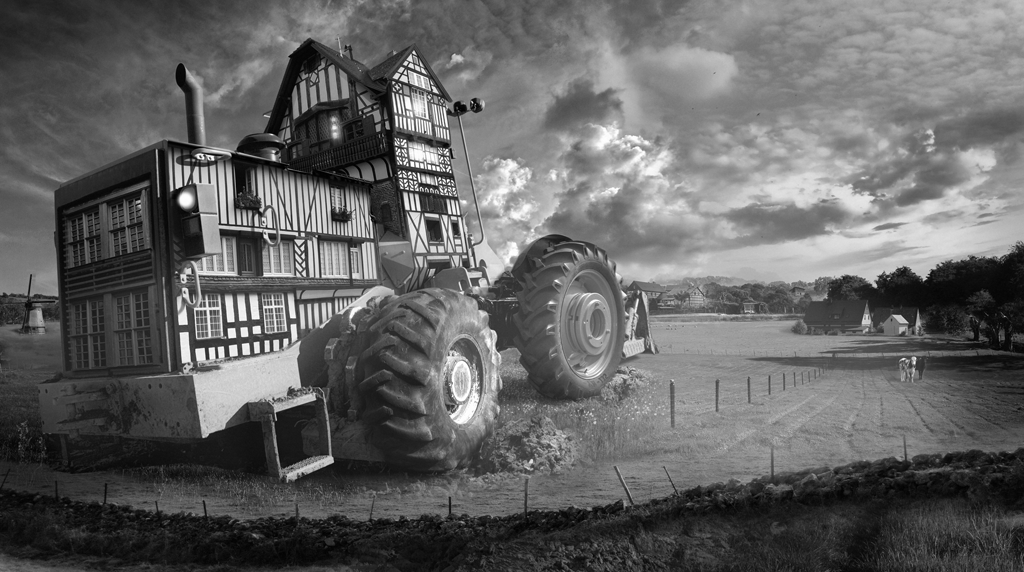 All images are © Copyright Barbara Nati 2012